A  foreword by Alexandre Fontaines
« Ach wie flüchtig, ach wie nichtig… » (in English « Ah how fleeting, ah how insubstantial… ») was composed in 2011 from February 10th to April 20th (in Paris, Mantes-la-Jolie, and Bosc-Roger, 3 cities of France), at the instigation of my friend Kotaro FUKUMA (dedicatee of the work), with the goal of performing it in his concert project « B to C » (« Bach to Contemporary »).

This prelude and fugue is a sort of personal homage to Johann Sebastian BACH (1685-1750). To pay tribute to J.S. Bach is something rather natural for a practitioner of occidental classical music : he is to music what Newton was for physics, or Michelangelo for fine arts : a centerpiece and a monument!

On a personal note, it was the introduction to his music (thanks to my mother, a non-musician woman with a keen taste) that led me to start studying and learning music.

This piece was premièred November 8th, 2012, in Berlin, « Pianosalon Christophori, Berlin » by Kotaro FUKUMA (who played it again on January 27th, 2015 at the « Tokyo Opera City »).

The binomial « prelude and fugue » is quite widespread in the Leipzig Kantor’s work, like in « The Well Tempered Keyboard » for instance, but also in his organ production (where the prelude can easily become a toccata, a fantasia, etc.).

If the prelude usually seems free in its structure in Bach’s music, despite some recurring formal (sometimes foreseeable) frames, the fugue, on the other hand, is a form that has numerous expected patterns and represents one the culminations of the art of composing, culmination in which this towering genius in the history of music deepened and exacerbated the mastery of occidental musical discourse to some sort of stunning and more than admirable perfection.

After a meditative prelude that gradually gains in scale and grandiloquence, the fugue becomes more lively and devilishly virtuosic ; it uses many features of Bach’s way of writing : counterpoint, countersubject, inversions, stretto, gematria, golden ratio and Fibonacci’s sequence, while building on the rhythmic and melodic structures inherited from this tutelary figure of European music.

The title of this work is directly borrowed from a « chorale » (which is a religious song) from the Christian Lutheran service. Why? Because in this work, like in some of Bach’s (cantatas, organ chorale preludes, etc) or Reger’s (for example), the fugue’s subject (after many vicissitudes and stretti) is superimposed to the eponymous song. 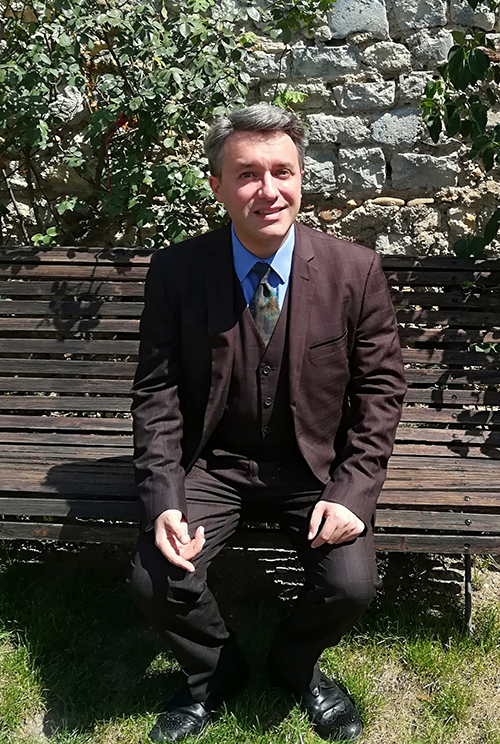 Alexandre Fontaines
Born in France in 1980 near Rouen, Alexandre FONTAINES started the cello at 9 years old, at the conservatory of Rouen, and composition at 12. He has since completed his training with the conservatories of Paris, Aubervilliers and La Courneuve in many classes. This training was rewarded with various prizes both instrumentals and theorics.

Admitted as student to CNSMD of Paris in 2004, he attended courses and received awards in Harmony (with Bernard de CREPY), Counterpoint (with Pierre PINCEMAILLE), Fugue and Forms (with Thierry ESCAICH), Analysis (with Alain LOUVIER), and Orchestration (with Yan MARESZ). He also obtained a Master in musicology.

Having a parallel activity as teacher in a conservatory and association as professor, he composed more than 65 works, from solo instrument to large orchestra. His music is recorded and has been performed around the world from Germany to Japan, Georgia and Morocco.