We are delighted to announce the publication of Kohei Tanaka/Pianeet’s “GUNBUSTER FANTASY” & “Incomplete Concerto”. It will be available for advanced sale at the concert by Yui Morishita(Pianeet) & Takashi Yamada in Kanagawa on 26th of May, 2018. The general release will take place on 28th of May 2018 via our webshop.

The transcription for piano “GUNBUSTER FANTASY” was based on the Japanese composer Tanaka Kohei’s original pieces that were composed for the sci-fi anime “Aim for the Top!”. In fact, this anime is known as “Gunbuster” rather than “Aim for the Top!” outside Japan. What is the “Gunbuster” ?… It is a space-going giant robot which was developed by the human for fighting against the space monsters invading the earth. The “GUNBUSTER FANTASY” was completed by Pianeet (Autonym: Yui Morishita) in 2011 and recorded on his debut album called “Singularity“. In addition to the album’s release, a video of his performance of “GUNBUSTER FANTASY” can be available on YouTube and Niconico. Pianeet is describing this piece as below:

“GUNBUSTER FANTASY” has the structure which is intended to remind listeners of the original anime story, based on the original musics composed by Kohei Tanaka. It would be appropriate to regard the “FANTASY” as the combination of suite or medley of the original sound tracks and overture style. As regarding that the musical motifs of “Gunbuster” and “Noriko” are respectively “1st theme” and “2nd theme” of G minor sonata form, we will have deeper understanding of the importance of the two motifs and the whole structure of the work. The recapitulation part  is actually out of typical sonata form, but the tonal relation between the themes is intentionally theoretical.

The second transcription by Pianeet is “Incomplete Concerto”. This is originally composed by Kohei Tanaka and it was used for the TV anime “Violinist of Hameln” as an opening theme song. When Pianeet performed its transcription at a concert in Kanagawa, he described on Twitter as bellow:

Mr. Tanaka says that the Incomplete Concerto is one of the best three works ever he has composed at least until 2009.
I’m fascinated every time I play the piece. This is absolutely cool!

Acknowledgments:
Thank you very much to Masanori Enoki (composer, pianist) for helping to edit/proofread this publication. 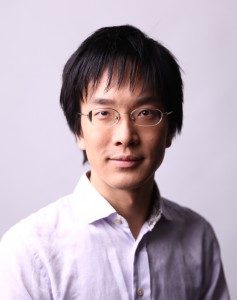 Yui Morishita, piano Yui Morishita is a Japanese pianist and composer. After graduating from Junior and Senior High School at Komaba, Tsukuba University, Yui Morishita studied piano at Tokyo University of the Arts and its Graduate School. In 2004, he won second prize at the Tokyo Music Competition. At his final recital of the Graduate School in 2006, he was chosen as one of the outstanding students to take part in the Bösendorfer Joint Recital (held at Hamarikyu Asahi Hall). He has given solo recitals at Tokyo Bunka Kaikan Recital Hall and also performs widely as orchestral soloist, song accompanist, and chamber musician. In addition to his playing, he provides music for films and he writes too. He is a strong advocate of the music of Alkan: he has edited and written commentary for the Japanese editions of his music and he has published a series of articles for Piano Teachers’ National Association website. He gave an all-Alkan recital in 2013, commemorating the 200th anniversary of his birth. Morishita is Associate Producer of the Chofu Festival in Tokyo, and also music staff of the Conducting Department at the Tokyo University of the Arts. In the online community, especially on video-sharing sites such as YouTube, he is also known under the name of “Duke of Pianeet”, and his CD “Singularity” released in 2011 became Amazon Japan’s top-selling CD in classical music.