The music score of La Valse by Ravel, transcribed by Kōtarō Fukuma will be released on December 23rd. The price is 2,500 yen (excluding tax) on 32 pages. This transcription has been recorded on Fukuma’s latest album “France Romance” and have been also performed at concerts by the Fukuma himself. In addition to direct sales on our website, you can also order from local music stores and book stores in Japan.
https://muse-press.com/fr/item/mp00103/

Although the composer himself left a piano solo arrangement for La Valse, many pianists have created their own arrangements in pursuit of a more orchestral sound. Fukuma’s one captures the largest number of notes among them and closest to the orchestral version. Please pick it up and enjoy it together with the recording of Fukuma.

For those who love and collect the French piano music, a coming album would be a must-listen CD. The Japanese pianist Kotaro Fukuma will release an album « French Romance ». As the name suggests, the album features the French piano music by various composers such as Poulenc, Satie, Fauré, Ravel and Weissenberg, including his own piano transcriptions. It will be released on Naxos Japan as a digital download and CD on 17th of April 2019. One of Muse Press’ publications « 6 arrangements of songs by Charles Trenet » which is a set of songs arranged for piano by the Bulgarian-French pianist Alexis Weissenberg has been also recorded on the album. In fact, Kotaro is the first Japanese pianist who performed all arrangements in one concert.

This is a video in which Kotaro talks about the album. (in English)

I made this transcription in 2013 as a surprise encore at a Paris concert. A few years before that concert I had visited the Satie House/Museum in Honfleur and enjoyed seeing funny and eccentric objects in the museum (like a pear with wings!). I felt like I was in an amusement park, and I tried to translate that feeling in this famous song by adding various ornaments to the simple melodies, so the listener encounters a new “attraction” every time the theme comes back. 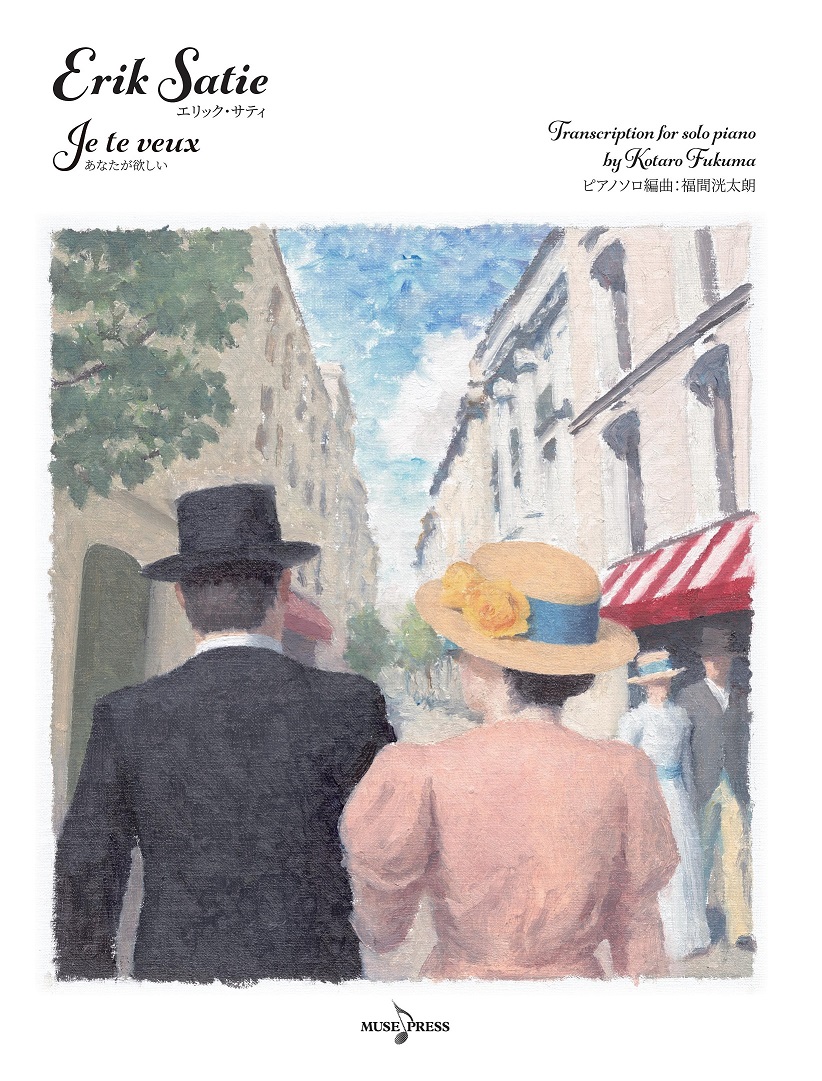 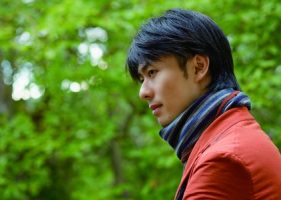 We are proud to announce that Alexis Weissenberg’s 6 arrangements of songs by Charles Trenet will be published by Muse Press LLC anticipated at the beginning of November 2018. The publication will be edited by the Canadian composer-pianist Marc-André Hamelin who re-discovered the arrangements and recorded them on his album Marc-André Hamelin in a state of jazz for the British music label Hyperion.

The publication is finally released!
https://muse-press.com/en/item/mp00701/ 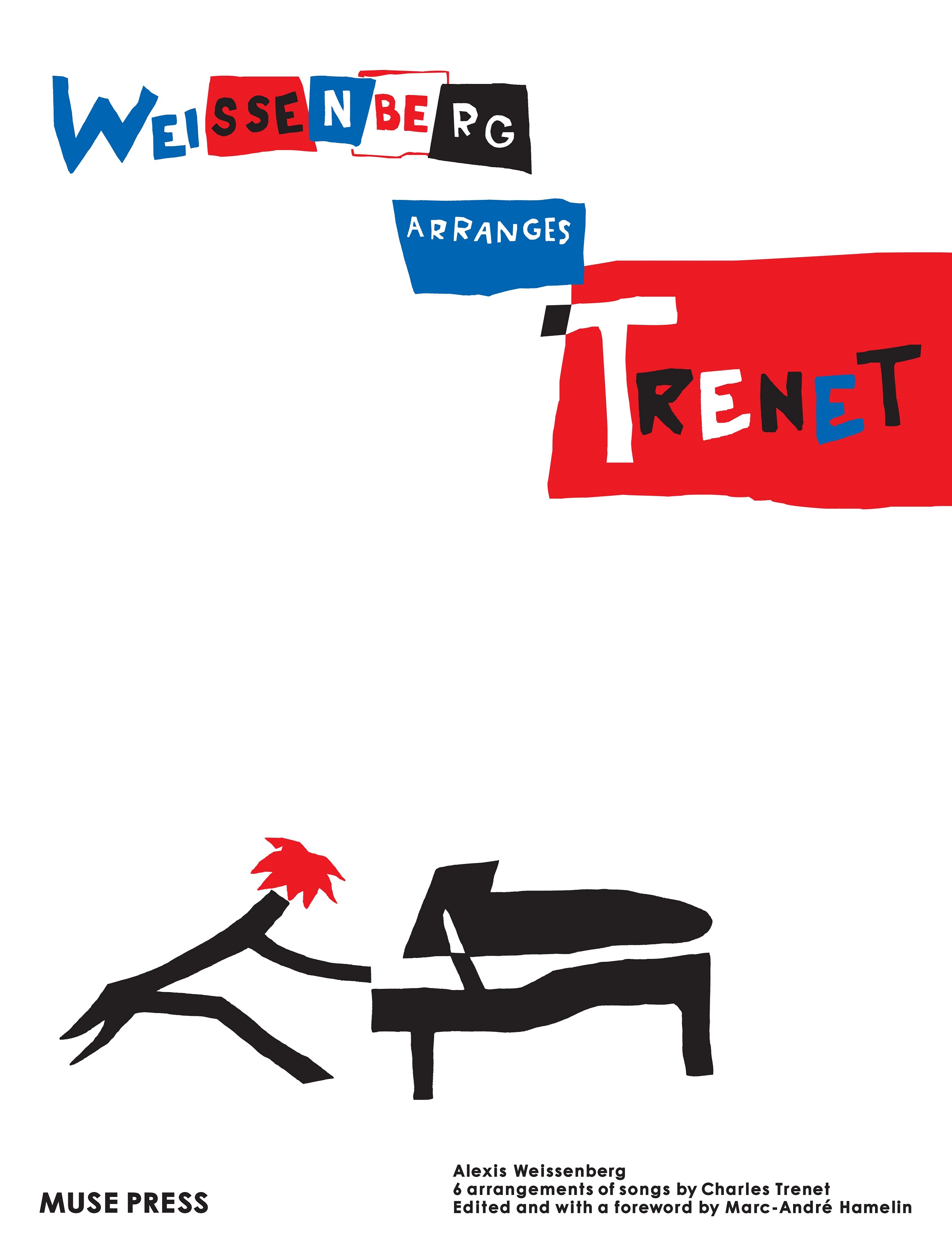 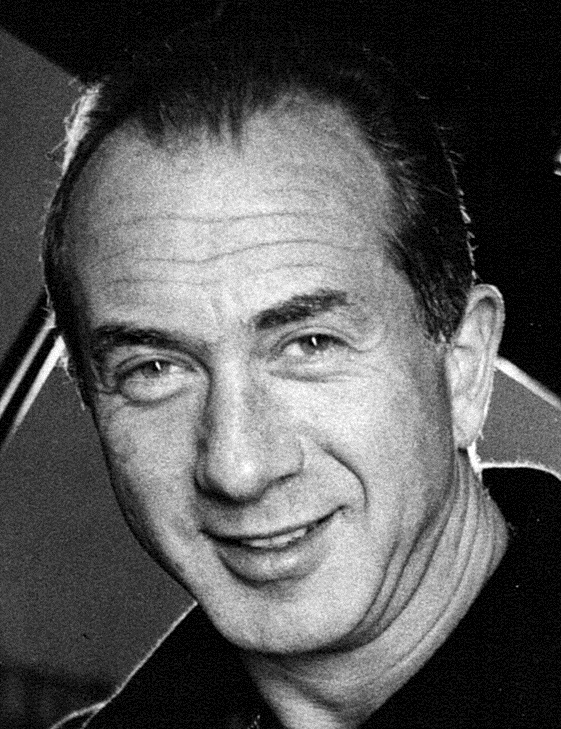 Alexis Weissenberg (1929-2012) has been recognized as one of the most successful pianists of his generation. His recordings have been issued on various labels including Philips, RCA, EMI, Deutsche Grammophon featuring Rachmaninoff, Liszt, Chopin, Beethoven, Bach and, Prokofiev. Additionally, he was also a composer, having started composition in childhood. His legacy includes not only original compositions but also transcriptions, cadenzas for Concertos, 4 musicals and song arrangements.
[Photo provided by Alexis Weissenberg Archive]

The editor of the publication, Marc-André Hamelin comments on the arrangements as follow: 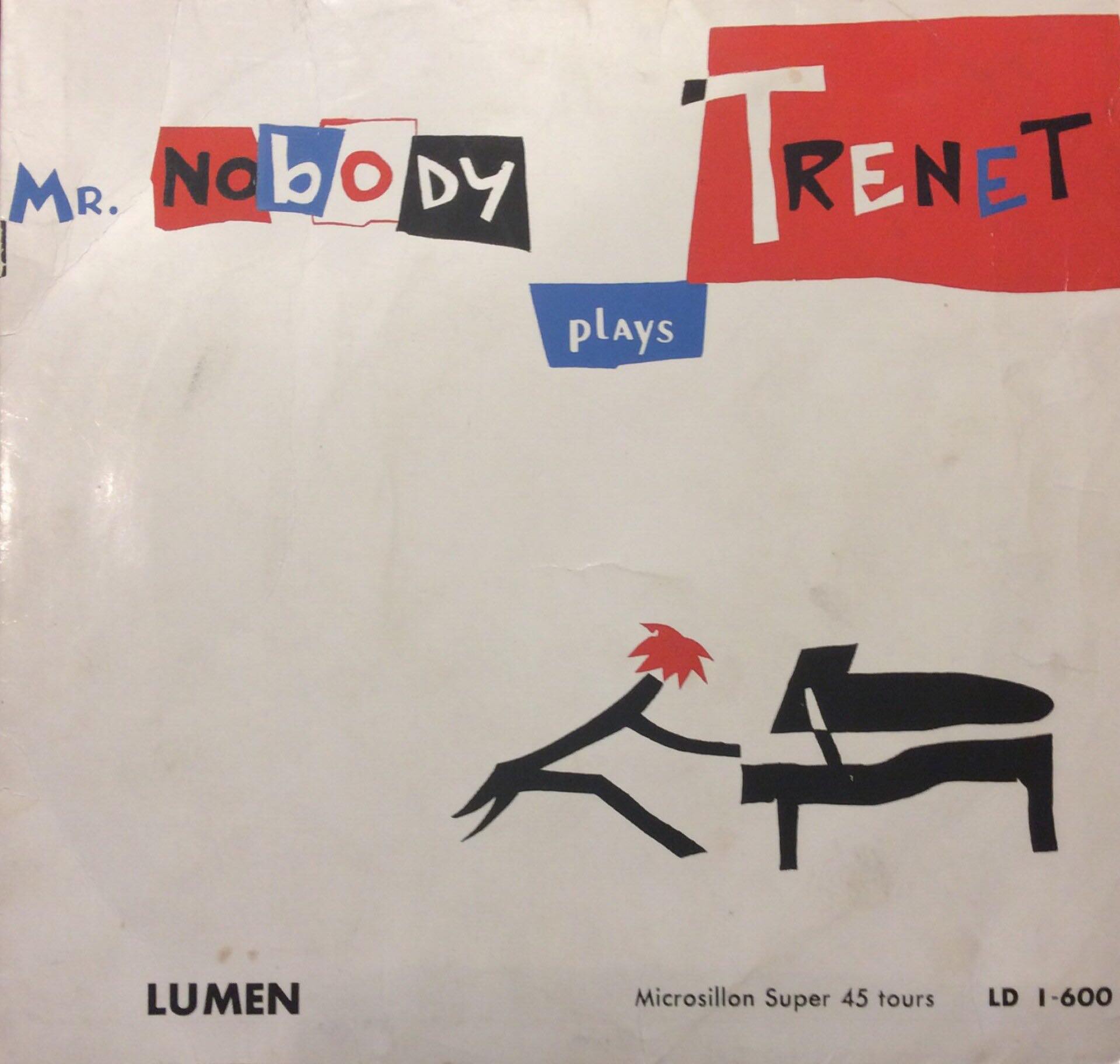 Sometime in the late 1950s there appeared on the Lumen label an extended-play 45-rpm record called Mr. Nobody Plays Trénet. It contained unusually creative and entertaining piano settings of six songs by the French singer-songwriter Charles Trenet (1913–2001). The identity of ‘Mr. Nobody’ was kept secret until relatively recently, when it was revealed to be that of Alexis Weissenberg. Before I met him for the first time (2004), I had assumed that the reason for not issuing the recording under his own name had something to do with the fact that, at that time, a serious classical pianist dabbling in such trivialities as popular song would most likely have been compromising his own career. (How times have changed…this kind of thing is welcomed, even encouraged, by record companies now.) But I do remember him telling me that he simply didn’t think the end result was good enough…! […] After receiving a multitude of requests for these scores over the years, I am thrilled that they are now finally being made available.

Some years ago, the family of Alexis Weissenberg discovered four of these six arrangements, in Weissenberg’s own hand. Therefore, this publication will comprise these manuscripts bracketed together with transcripitons of what is actually heard on the Lumen recording.

We are very proud to announce that the piano music of Ronn Yedidia will be published gradually by Muse Press. As his first publications from Muse Press, two piano works Ether and Toward the Gardens of Heaven will be published on 6th of August. Its pre-release will be held at Shota Ezaki’s recital which will take place at the Kioi-cho Salon Hall on 5th of August with the presence of the composer. 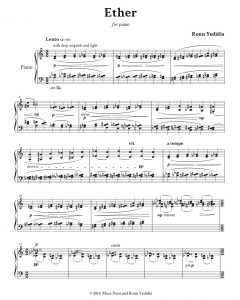 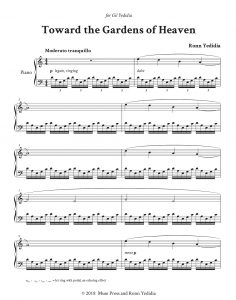 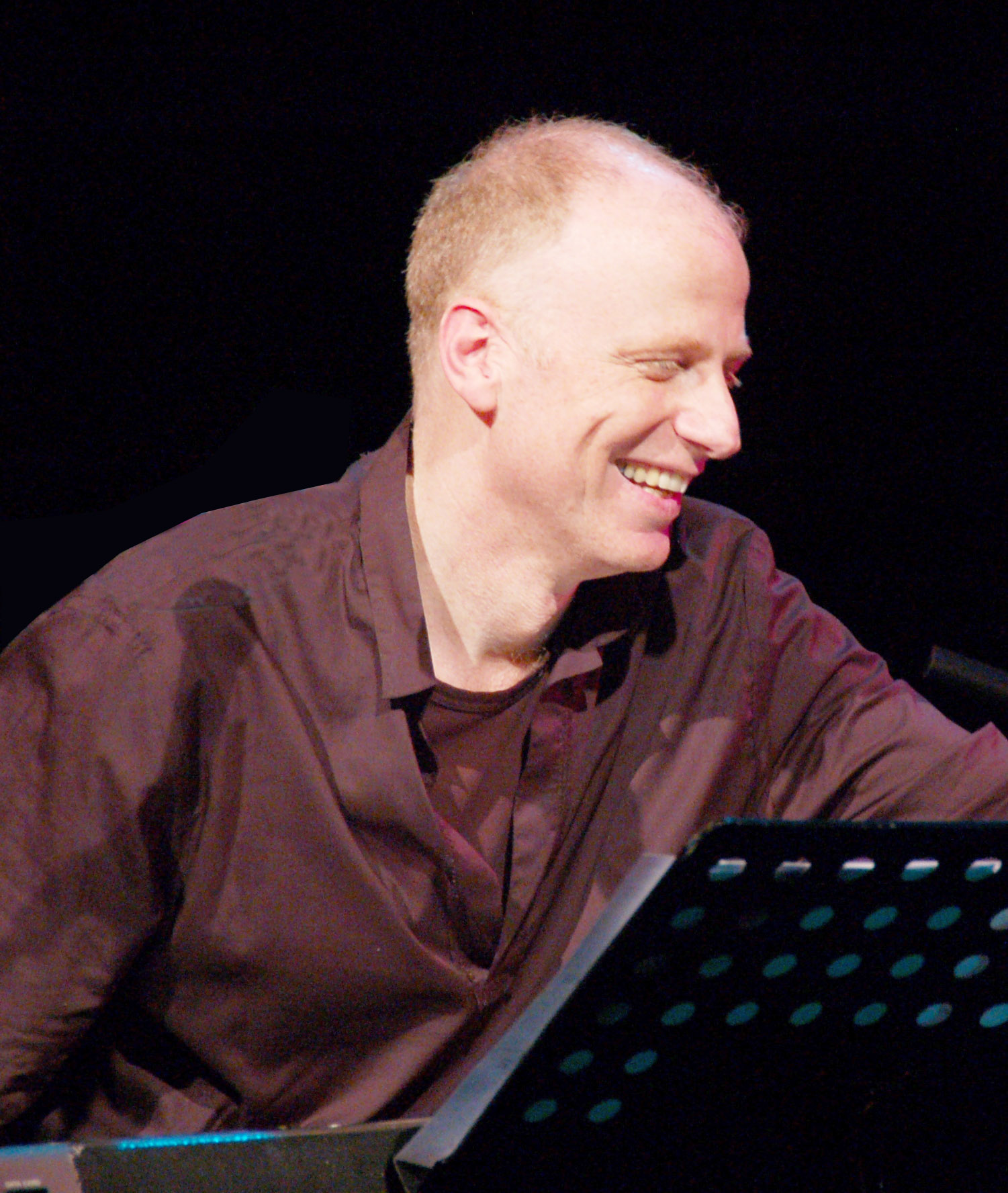 Ronn Yedidia’s compositions have galvanized the attention of performing artists worldwide during the last two decades. His works have been featured in major concert halls and documented on film, radio and television. He has won high critical acclaim from leading newspapers around the world, as both composer and pianist.

Born in 1960 in Tel Aviv, Israel, he began his musical career as a child prodigy pianist, winning 1st Prize at the Young Concert Artists’ Competition of Israel at the age of eight. His main teacher and mentor was Israel’s first lady of the piano, Pnina Salzman, who herself was a protege of Alfred Cortot. Active as a performer for many years, Ronn decided at the age of 15 to shift his attention towards composition. In 1984 he entered the Juilliard School from which he holds a Doctor of Musical Arts Degree in composition. During his studies there under David Diamond and Milton Babbitt he received all the major prizes in composition, including the Lincoln Center Scholarship, the Irving Berlin Scholarship, the Henry Mancini Prize, and the Richard Rodgers Scholarship. He also won the Juilliard Composition Competition twice – in 1987 & 1989 – and as a result had his works performed at the Juilliard Theater and at Alice Tully Hall.

Soon after receiving his DMA in Musical Composition from The Juilliard School of Music in 1991, composer/pianist Ronn Yedidia decided to abandon all the common trends which represented mainstream contemporary music, and instead embarked on an individual journey toward the re-establishment of traditional tonal principles such as melody, harmony, form, aestheticism, drama and dialogue. His passion for folk, jazz and other non-classical genres of music which maintain tonality in their essence has helped him enhance his musical language. He has written for all instrumental mediums from solo through chamber to symphonic works, and for most vocal idioms including art song, pop/folk songs, and both sacred & secular choral works. The world premiere of his work “Steps In The Wonderland” was performed by The Israel Philharmonic Orchestra in May, 2007. Major commissions include the San Antonio International Piano Competition, the Seattle Chamber Music Society and the Zamir Chorale of New York. In 1994, Yedidia was invited by Wanda Toscanini-Horowitz to edit and record the unpublished piano compositions by the legendary pianist Vladimir Horowitz.
Ronn’s compositions have been recorded by renowned artists and ensembles on many major labels such as EMI Classics, Naxos’ American Classics series, Hyperion Records and Sony BMG. His solo album “Yedidia Plays Yedidia”,
on Britain’s Altarus label, has galvanized the attention of numerous pianists and composers around the world. In addition to his many national and international awards, Dr. Yedidia has won special grants from both ASCAP and BMI, and a New York Foundation for the Arts Fellowship. He is the co-founder and Classical Program Director of The New York Piano Academy in Manhattan.

We are delighted to announce that we will publish an unpublished transcription “Home, sweet home” by Leopold Godowsky (the original piece was composed by Henry Bishop) with a preface by the Canadian composer-pianist Marc-André Hamelin. 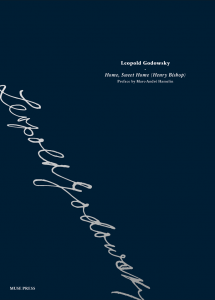 Although Leopold Godowsky recorded the transcription on piano roll and Brunswick, its sheet music have never been published up to now for some unknown reasons. The pre-order of the sheet music will start at the recital by Marc-André Hamelin on 25th of June in Tokyo. And the online sales will start on 26th of June thorough the website of Muse Press. 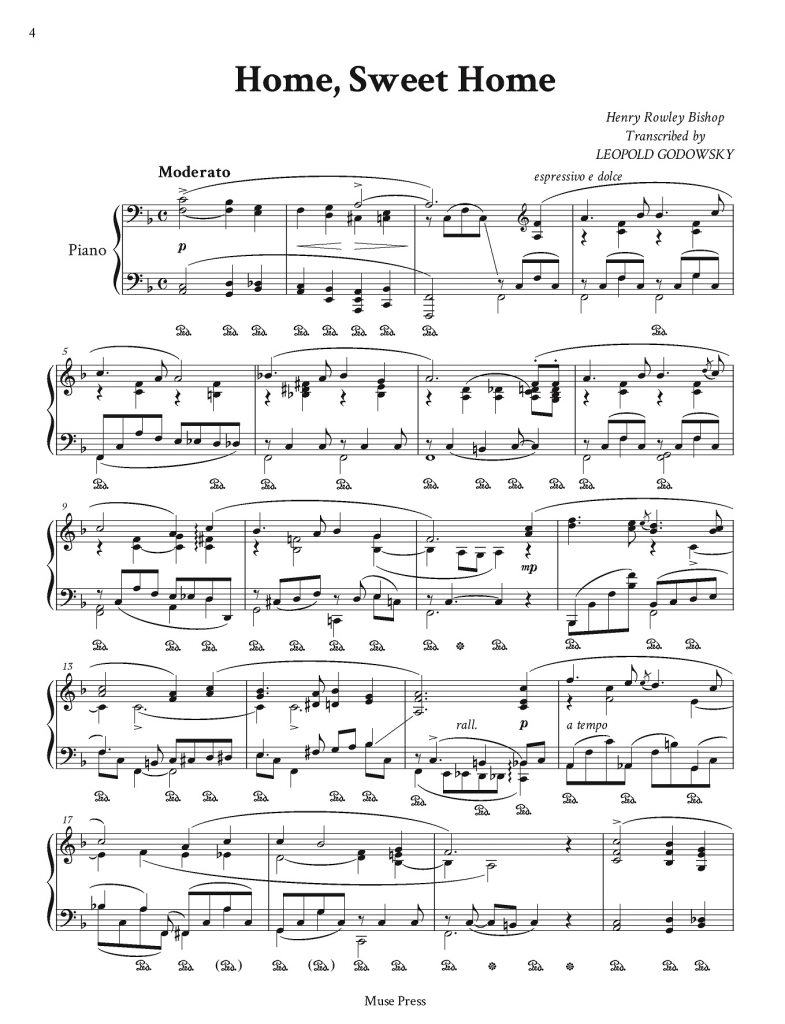 The Italian pianist Vincenzo Maltempo  is one of the leading pianists of his generation. On the other hand, he is also buldingan incredible career as a composer and transcriber. Muse Press is finally ready to publish his transcripitons and cadenza. 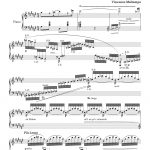 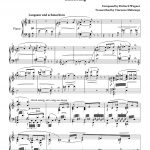 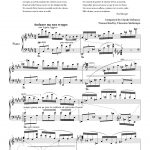 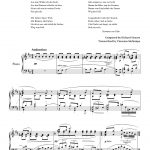 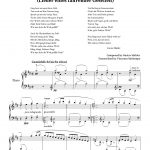